A Review of The Cursing Stone in Pete's Irish Lighthouses

An Early Review by Peter Goulding

Since I left school, nearly 45 years ago now, I don’t think I have ever written a book review. There are a number of reasons for this.

Although the advice to writers has always been ‘read, read, read,’ I don’t actually read much. The only books I do read are factual books, mainly involving local history.

Another reason is that I have always been suspicious of reviewers and critics. Either they are palsy-walsy with the person they are reviewing, in which case the review is impossibly laudatory; or they are trying to make a name for themselves with a witty turn of phrase or a damning put-down. It breaks my heart to see anyone – musician, author, actor – pilloried in the press by someone who has not the talent nor dedication nor creativity to produce anything original.

However, I’m going to make an exception in this instance after coming across Tom Sigafoos’s historical novel, The Cursing Stone, which, I believe, contains enough lighthouse content to warrant inclusion on this blog.

Basically, Tom has very cleverly woven a novel around an event in Ireland’s maritime history that has fascinated myself and others by the many unanswered questions that surround it.

The event is the sinking of the H.M.S.Wasp under the beam of the lighthouse on Tory Island off the coast of Donegal on a clear night in 1884, with the loss of all but six of the crew. The Wasp was on its way to evict islanders from their homes on the island of Inishtrahull, a little further along the coast, when it ran aground. Rumours later surfaced of ‘a cursing stone’ being invoked on Tory to forestall the evictions. 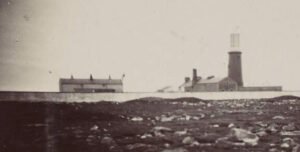 The Tory Island lighthouse c. 1905. The lighthouse, like Mew Island, was painted black until 1954/55 when both were given a white band. (Photo the CIL collection, National Library of Ireland)

Tom has obviously done a huge amount of research on the subject for even small details are accurate. A new Principal Keeper at Tory had only arrived a few days beforehand. A lad from the island had been drafted in to help man the light. The topographical description of the island demonstrates familiarity with the subject. Even the hapless priest, hell-bent on converting the primal islanders – shades of The Wicker Man? – appears faithful to the actual priest of the time.
But although the facts of the incident remain central to the plot, it is the ingenious way that the fictional story fits into the narrative that delights. I probably have an advantage in that I’ve visited Tory, more than once. Though hardly an expert, I can recognise the landscape and the people. Today they are a law unto themselves – 140 years ago, they were fiercely independent, politically, economically and religiously, as well as geographically, like their fellow islanders on Inishtrahull. They were Christians on their own terms, with a smattering of an ancient religion thrown in for good measure. Like Inishtrahull, they had a King who adjudicated on disputes. The priest, like the lighthouse keepers, were accepted but were regarded as transient visitors, held slightly at arm’s length.

The book is a chunky one, over 360 pages, but I devoured it in two sittings. The main characters are well developed and believable and I found myself really caring what happened to the main protagonist. There are many issues dealt with in the story – British empire-building, the role of the ordinary British seaman, the picture of an island community on the cusp of its inevitable submersion into the political status quo, landlordism and, most importantly, the dispute over the respective effectiveness of  static and flashing lighthouse beams. It so engrossed me that I may even consider reading another novel.
In all seriousness, I have no qualms about recommending this book to anyone. Its a cracking read from start to finish and I was kind of sorry when I finished it.