A writer is, after all, only half his book. The other half is the reader and from the reader the writer learns. – P. L. Travers

Historical Fiction at its Best  This story is a delight. Set in 1884, we are introduced to the tiny community living on Tory Island off the north west coast of Ireland, with barely enough to sustain them. Cue a British naval vessel assigned the task of transporting a sheriff and his men to the islands to evict and burn the cottages of the families whose rent is in arrears. This is already a potential powder keg and the makings of a great story. Add a smorgasbord of fascinating characters: a one-eyed young man and his psychic aunt, a lonely, diminutive schoolmaster, an alcoholic priest, pitching his Christian dogma against pagan beliefs thousands of years old, and a fractious lighthouse crew. On board the naval vessel, we have a captain confined to his cabin by his infirmities and a portly sub-lieutenant, learning the ropes while bedevilled by self-doubt. The scene is set on page 1, where we read the monument on Tory Island that commemorates the sinking of a naval vessel. Providing the reader with a limited, but definitive knowledge of the outcome works beautifully, and the writing is exemplary. Highly recommended. – JJ Toner, Author of The Black Orchestra

I just finished Tom’s novel The Cursing Stone. I absolutely devoured it, a thrilling story with great characters and tension throughout. Well done! Everyone else: get your hands on a copy. – Shane Leavy, Co Leitrim, Ireland 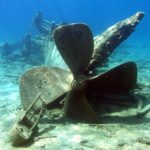 HMS Wasp is doomed. We know her fate, and that of her crew, from the beginning like characters in a Greek tragedy. Time, place, and circumstances must align before the ill-fated event transpires. However, the author does not to allow any note of despair to mar the narrative. The reader is drawn into the complex web of the story, which is woven with great skill, linking the people of Tory to the crew of the Wasp.

In many ways, the novel is a study of the inner lives of multiple characters with their various personal and physical flaws. Ruairí Mullan grapples with the loss of his eye; Gubby has a health problem, lacks confidence, and fails to communicate with his fellow officers; the Captain is seriously ill, suffering from the effects of a sexually transmitted disease. When these flaws and failings are compounded by the storm, there is no going back…

[The] image of the doomed ship in its final throes at the mercy of the ‘wide grey-green slab streaked with black’ is one of many powerful images that linger after the final chapter is finished. – Mary Turley-McGrath, author of After Image, Co Donegal, Ireland 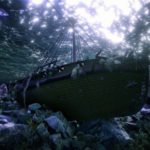 This was definitely a good book… I learned a little history of Ireland in an intimate way… Tom Sigafoos makes you feel every situation and person in the story. I want to know what happened to some of the others now! Every day I looked forward to reading The Cursing Stone and I want more! – Val Stepanchuk, Ontario, Canada

Great book. I tend to read history more than novels so I really appreciated that the author maintained so much of the historical accuracy of the events surrounding the Wasp. Thanks for a great read! – Steve Ulm, Cincinnati OH

I share my life with a lovely pensioner [and] I still get a kick out of choosing wee birthday gifts for him, including a selection of books I thought he’d enjoy.

I headed off to bed last night, with his assurance that he’d be ‘…along in a minute.’ At 03:30 I woke up as he closed the bedroom door and proceeded to enthuse over The Cursing Stone by Tom Sigafoos, that he (my beloved pensioner) had stayed up almost all night to finish.

He reckoned to me: ‘It’s one of the *best* books I’ve ever read. The research is phenomenal. I can’t believe I sat up and read it, right to the end, all in one go… What a birthday, thank you.’

Congratulations, @tomsigafoos on this publication, and for successfully managing to keep one man up all night. – Jo Nestor, Co Leitrim, Ireland

Absolutely brilliant! Riveting stuff. I couldn’t leave it down. Great characterisation. Huge range of research in so many areas. I learned a lot. – Anne O’Connell, Cliffony, Co Sligo, Ireland

Every character just comes to life off the page – through both the interactions between them and the skilful sketching in of their back-stories. The various settings point up the different worlds Ruairi is drawn into – the way of life on Tory is so clearly drawn, including the slightly separate life of the lighthouse, and it seems a long way in time and place from the very different world of Westport, and again from the life on board the Wasp.

But beneath all that, and bringing the stories together is the step-by-step portrayal of the historical background – we learn about it slowly, as Ruairi does – never too much information, but enough to allow readers to come to a realisation of the potential for ugliness of a world in transition from old communal ways to a new one of ownership of land, of rents and violent evictions.

These various strands in the story link so naturally with each other, the different story-lines each building its own momentum as they move towards the shipwreck and all mesh into place. Nothing in the story is unnecessary, but there is a fund of just the right detail to bring everything to life and make the characters and their fortunes so deeply interesting. Gubby, Ruairi, the various  crew-members on the Wasp, the lighthouse cast, the map-school and of course the island community – all are painted in with such light brush-stokes and yet there is a sense of each having a full life-history. – Rosalind Duke, Lecturer (Retired), Development and Inter-Cultural Education, Dublin City University, Ireland

This book has a wide sweep, taking in Toraigh Island, the lighthouses of Ireland, map drawing and the English Navy. It explores many themes of the late 19th century – class,

religion, folklore and the old ways, poverty, infirmity, the harshness of life and oppression, duty and blind observance during a turbulent period in Irish history. I got hooked on the free installments and had to buy the book. Amazing attention to the detail of the period. A very enjoyable and thought-provoking read that stays with you after you finish it.

I wonder at the honouring of mixed motives, so faithfully, and bravely, communicated. I loved learning – about the hierarchy in her Majesty’s Royal Navy, about power and might being “right” – such an easy and uncritical equivalence – one we still use so lazily!

I love the honouring of the powerless, and the dignity and spirit accorded them. I love learning about – vividly – the details of boats and ships and sailors, and quays, and gangplanks, and map-making and much, much besides! And I love being given again the rich flavour of yesterday, in its many levels and guises.

As a grandchild of an island-woman from off the north-west coast of Donegal, may I say, “Thank you”!

I read the first ripping installment of Tom’s novel. He’s got a little of the Robert Louis Stevenson about him it seems at this early juncture. I enjoyed it. Can’t wait for the pirates. – Melinda Jackson, Portland, Oregon

I especially like the elements of folklore that are woven into the story – Colmcille throwing his staff to claim Toraigh for Christianity, Balor of the evil eye and Nuada

of the Tuatha de Dannan who (like Ruairí) was precluded from kingship because of his imperfection.  I also enjoyed hearing how the people of Toraigh lived – the search for birds eggs, the straw mattresses, the fishing , the painting with pitch to preserve the curraghs among many others.

The characters are well drawn and I loved the humour in the exchange between the school master, speaking for the people, and the assessor, as well as between the inflexible old priest and the open-minded teacher.  ‘I see trouble ahead …’

You paint on a wide canvas, and you always stop at a place where I want to turn another page.  I look forward to the next instalment. – Kate Murphy

Having read three episodes of The Cursing Stone, I am increasingly curious about the next episodes. The descriptions of the characters, and the language is capturing. I love the historic aspects of the story, and the writer has brought me into the last century and given me a real feeling of the way the islanders lived and thought. I’m hooked! – Ria Opgenhaffen

Beautifully written and compelling story based on the sad events of the mid-nineteenth century. The interweaving of the characters and the tragedy of the HMS Wasp are masterfully handled, this is such a good read. — Lissa Oliver, Dublin, Ireland, author of Chantilly Downs